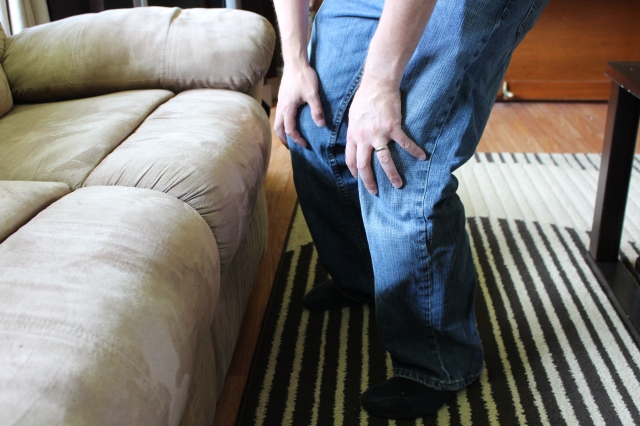 I’m sure we’ve all heard it. Pastors and ministers railing on about the benefits of prayer. And we can’t deny it. Prayer has the potential to change the world. But shouldn’t we also consider the dark side of prayer? Thankfully, I have personally considered it and you can now benefit from my consideration. (Don’t mean to brag but apparently I have a gift for considering the negative side of things.)

1. Prayer can be time consuming.
For instance, more time spent in prayer means less time for other more important activities like watching TV, surfing the net, or cleaning the house. You can’t find out what somebody had for supper while kneeling in prayer. You need Facebook for that. You can’t watch a TV that isn’t covered in dust by making supplication before the Father. You need to clean the house in order for such a situation to occur. Which brings me to my next point.

2. Prayer is hard work.
To pray effectively you really need to concentrate and focus your attention on God alone. If you think this is easy then just try it sometime. It’s not easy. It can be hard. Almost like work, especially when it comes to intense intercessory prayer. And who really wants to work? Don’t we all want the easy way out of everything? Checking your Facebook feed is much easier. It can be hard on the fingers but other than that it doesn’t require a great deal of energy.

3. God may say no.
When you ask God for something in prayer there’s no guarantee that He’s going to say yes. He may actually say no and who wants to hear that awful word?

For instance, a young man was once overheard having a conversation with God:
Young Man: “Dear God, please let me marry that gorgeous lady who works at my office.”
God: “But son, she doesn’t believe in Me, she’s immoral, and at times she can be downright nasty.”
Young Man: “But she’s beautiful and I think I can change her.”
God: “No you can’t.”
Young Man: “Please……..”
God: “Sorry son, the answer is no. Besides, I have someone much better for you if you’re willing to wait just a little bit longer.”

Let’s take a moment and examine this mythical conversation (I know it’s mythical because I just made it up in my head). God utters two words here that are hard to bear. Firstly, he says “no”. Then he says “wait.” Which brings me to my next point.

4. God may say wait.
We all hate waiting don’t we? Think long, slow, line-ups at a drive-thru window. Or Christmas shopping with your wife. Or shopping any time of year with your wife for that matter. It’s like ordering a camcorder on e-bay from a seller based in China. The reason I know this is because I have actually done it. Yes, I did eventually get the camera. It was cheap and it worked fine. But I had to wait several weeks to get it. You can only imagine how devastating it was for me to check the mail week in and week out only to find bills and charity pledge forms, but no camera. The fact I have the camera now and might possibly enjoy using it for years to come doesn’t change the fact I had to spend a few weeks without it.
​5. You could end up with sore knees.
Tradition says that the apostle James earned the nickname “camel knees” because he spent so much time in prayer that his knees became swollen. Who wants swollen knees? Knees that resemble those of a camel can be an eyesore for others, especially during the summer. The best away to avoid camel-like knees is to spend less time on them. Of course, you could use a cushion. But then you run the risk of damaging or dirtying the cushion.

The only safe way to avoid both dirty cushions and swollen knees is to forsake prayer. Of course you don’t have to kneel to pray. Rumour has it some people have prayed while standing, sitting and even walking. But there’s no need for such radical spirituality. The safest route is not to pray at all. Now if you’ll excuse I have to go and fill the rest of my day with useless busyness.